Each Spring, the FCG membership body elects a leadership team of six members to run the organization and ensure the execution of FCG’s mission. Learn more about the current administration below.

Eric Prince is a second-year Master of Public Policy candidate at the Frank Batten School of Leadership and Public Policy at the University of Virginia. He received his Bachelor of Science in Health Science from Virginia Commonwealth University in 2014. His policy interests include corporate and social responsibility, and global development.

During and after undergrad at VCU, Eric worked with and ran a nonprofit that provided education and resources to refugees displaced in South Sudan and Ethiopia. Eric had the opportunity to work with many international organizations and work directly with former refugees of the First Sudanese Civil War. Eric also worked with another small nonprofit providing training and education to indigenous farmers in Central and South America. As an FCG Project Manager, Eric has worked with the Public Education Foundation and for the Blue Trunk Foundation.

Mary Greeson is a second-year Master of Public Policy candidate at the Frank Batten School of Leadership and Public Policy at the University of Virginia (U.Va.). Greeson’s policy interests include transportation and social justice. Her past FCG consulting projects include the Cancer Action Coalition of Virginia and the Urban Agriculture Collective of Charlottesville.

Greeson is already a graduate of the University of Virginia (B.A. in Foreign Affairs). Prior to Batten, she managed event transportation services at U.Va.’s Department of Parking and Transportation, focusing on better business practices and operation optimization. Her recent coursework at Batten has explored complex interstate governance structures. 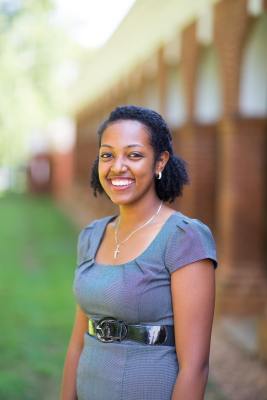 Nardos Assefa is a second-year Master of Public Policy candidate at the Frank Batten School of Leadership and Public Policy at the University of Virginia. She received her Bachelor of Arts in economics from U.Va. in 2017. Nardos is interested in foreign affairs and international development policies.

Nardos is passionate about public service and has served the Charlottesville community in different capacities. As a member of FCG Consulting, Nardos worked with Madison House and Public Education Foundation (PEF). She currently serves as a student data analyst for EdPolicyWorks at the Curry School of Education and this past summer she interned at the Federal Executive Institute in Charlottesville, VA.

Kristin Fioretti is currently a Master of Public Policy candidate at the Frank S. Batten School of Leadership and Public Policy. Prior to graduate school she worked for the US State Department as a Passport Specialist focusing on passport and visa fraud prevention. She served as a Peace Corps volunteer in El Rodeo, Nicaragua and Nueva Guinea, Nicaragua from 2011-2013. As a volunteer, she worked on projects devoted to microfinance, women’s empowerment in the supply chain, financial literacy, and youth development. Having worked in various capacities, her main policy interests are in national security, international affairs, social entrepreneurship and humanitarian relief.

Evelyn Immonen (Eve) is a second-year pursuing a Masters in Public Policy at the Frank Batten School of Leadership and Public Policy at the University of Virginia. She graduated with an English major in Spring 2017 from the College of Arts and Sciences at the University of Virginia. Her policy interests include domestic social welfare and Native American public policy.

Eve has been a part of several Executive Teams in the past, and seeks to facilitate a welcoming and professional environment for FCG as an organization. She served on the executive team for the Native American Student Union and the Minority Rights Coalition, and as a Senior Support Trainer for Honor. Her work in FCG with the Urban Agriculture Collective of Charlottesville led her to pursue a certificate in grant writing through the American Grant Writer’s Association. She is also passionate about service. She has worked with the National Parks Service through Alternative Spring Break for two years and volunteered for summer at a youth development center on the Cheyenne River reservation in South Dakota.

James’s policy interests include global development and social welfare. His has interned at Iraq and Afghanistan Veterans of America and Virginia Victory. In Batten and UVA, he has been involved in Madison House and Jefferson Society. This summer he will be interning at the Consumer Financial Protection Bureau in with the Technology and Innovations group.